Planning applications relevant to the parish will be published here.

The proposed construction of an inert waste recycling facility.  Additional information has been received in respect of the above application upon which Blisworth Parish council have previously been consulted.  A copy of the amended details are available at: www.northamptonshire.gov.uk/planningapplications.

Blisworth Parish Council have already submitted a detailed objection on behalf of the residents.

Blisworth Parish Council has been approached on behalf of the Harworth Group, who is preparing proposals to create more warehousing space off Junction 15 of the M1, near Collingtree in Northamptonshire.
The proposals include six industrial units, delivering 1.64 million sq. ft of logistics space.
We would be interested in residents’ views on this proposal.

Thank you to all the residents that attended the public meeting to discuss the SEGRO application to vary the conditions of their Development Consent Order (DCO).  There was standing room only in the village hall and universal agreement that we should object to this proposed amendment.  The public was provided with information on how to contact the planning inspectorate and also our local MP about this issue, as requested.

New proposed changes to the Gateway development by SEGRO

The consultation has now closed as of Monday 26th September at 11:59 pm.

Blisworth Parish Council received the following letter  regarding the Northampton Gateway development by SEGRO.  Letter of Notification of amendment to DCO
The letter is notifying us of the consultation period for the amendment to their original planning application which,  we believe, will allow the developers to begin using the warehousing units ahead of the completion of the rail/freight interchange. There is an obvious impact on our community..
This is a significant change in their original planning application and will create further road traffic issues through the surrounding area particularly every time the M1 junction is closed or even when there are traffic delays on the M1.
Please a further communication from SEGRO: Updated Letter from SEGRO
Response to SEGRO Meeting on 21 September 2022.  We very much appreciate the effort you made to come to Blisworth and help us get a better understanding of your proposals and the background to some of the issues.  Like other parish councils in the area we still have serious reservations about your application; nevertheless, we have acknowledged the effort you have made to engage with us on the issue and we hope that our response is better informed as a result.

West Northamptonshire Council’s (WNC) are seeking residents’ views on their draft Supplementary Planning Document (SPD) for employment land allocations in the area.  This new document will sit alongside the South Northamptonshire Local Plan Part 2 to help inform decision-making on planning applications.  The draft SPD document aims to provide greater detail and certainty to the public and developers by setting out overarching design principles for the future development of the employment sites identified in the Local Plan, including guidance relating to size, scale and density of buildings.

Blisworth Parish Council will be submitting a response stressing:

The importance of maintaining designated villages

The impact of such development on highways and traffic

The importance of recognising and considering the wider impact on communities

The need to restrict the height of such new developments, ideally to 12m

The importance of considering the cumulative impact of such developments.

We would urge residents concerned with the increase in developments in the surrounding area to submit their views to show the strength of feelings from the residents and voters.

Cllr Rebecca Breese, WNC’s Cabinet Member for strategic planning, built environment and rural affairs, said: “It’s important that we have effective planning policies in place which support our goals to boost our local economy by bringing new employment opportunities into the area.

“Our policies must be underpinned by clear and robust guidance for both local residents and developers to ensure future development of these sites is appropriate in size, scale and density, and this Supplementary Planning Document aims to do just that.  I would urge everyone with knowledge of this area to get involved in this consultation to help shape guidance that will inform our future decision-making on these issues.”

As well as being able to view the SPD documents online, residents can view them at the WNC offices and the library at The Forum, Moat Lane in Towcester NN12 6AD, and libraries in Brackley and Deanshanger.

Residents can also email localplanconsultation.snc@westnorthants.gov.uk with any feedback.

We would encourage all residents to make their views known to West Northamptonshire Council on application WNS/2022/1134/MAO using the following link:  https://snc.planning-register.co.uk/…/WNS/2022/1134/MAO

Please let other residents know about this new planned development and if possible help friends and family to submit their objections so that WNC has the opinion of all the residents of Blisworth village and not just those that are happy and able to submit information online.

Blisworth Parish Council discussed the application at public meetings on 4 July 2022 and 1 August 2022 and wish to submit our OBJECTION to the proposal as outlined.  While we continue, as stated in our submission in response to the public consultation to be, in principle, open to and supportive of appropriate sustainable redevelopment of brownfield sites in the locale, this proposal represents a significant change in use that would severely impact the well-being and safety of village residents.

We would like to make the following points in support of our objection:

[1] Vehicle Activated sign in Towcester Road, 115,692 outgoing movements and 82287 incoming movements over 35 days, 02 April 2022, to 07 May 2022. A maximum recorded speed of 94mph and 85% of vehicles travelling below 43mph.  The average speed is 34mph. These vehicles use both the Gayton Road and Towcester Road Junction and the Stoke Road to High Street Junction.

This development would result in an increase in traffic flows of 19% thereby significantly exacerbating recognised existing traffic problems in the village to unacceptable levels. 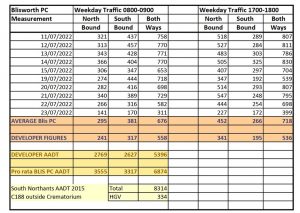 We request that WNC consider this application in the context of the many other developments underway or planned in the area which will impact Blisworth, included in Appendix B.  We consider that it is essential that the cumulative impact is taken into account alongside the expansion in housing and industrial use South of Northampton Town and North of Towcester by the Council when considering this application.

Lastly, we believe that the public consultation has been inadequate: the impact on the rural road network was not made clear in the engagement; support for local businesses has not been evidenced and the significant change in use was not made explicit. Only four responses do not suggest support for the proposal but rather an inadequate consultation process, particularly when 232 objections have been lodged on the WNC website by the 5 August 2022.

We would also raise a strong concern around the practice of developers gaining permission and subsequently applying for alterations to the application.  We are concerned that any agreement to develop this area could be subject to future expansion and the resulting traffic impact also if WNC were minded in considering and the approval of this application there would need to be significant investment in the highways infrastructure locally including footpaths using instruments such as the former 106 agreement/CIL levies.  As I am sure you agree there would undoubtably be a significant need to upgrade and improve all the local roads, junctions, signage and pedestrian and cycle networks throughout the village should this proposal go ahead.

In conclusion, we reiterate that the current proposal is unsuitable for the location and is strongly opposed by local residents. We ask the WNC to reject it.

Click on the link to see examples of photos as part of the objection: Appendix A – Road Traffic Examples

Click on the link to see list of other applications impacting on Blisworth village: Appendix B – Planning applications 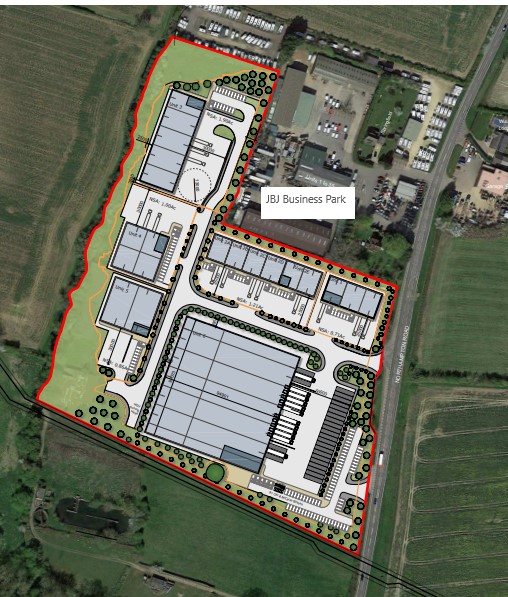 Blisworth Parish Assets - Click on the below interactive map to see items across the village. Click on the item to see who is responsible for them: https://shared.xmap.cloud/?map=8dda0cd0-a91d-4554-8931-812e0fa09ac2

Theme by Anders Norén — Up ↑